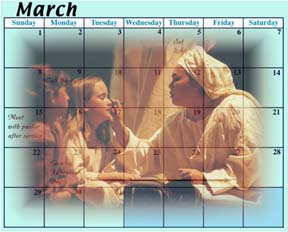 Keeping track of all the tasks for the “Producer” and the “Director” of God’s Masterpiece need not be as daunting as it appears. Here is a calendar that will save your sanity. In addition to the helps provided on this page, we have created a “Production Checklist” which will help you navigate through the development and production process. Click here to download your “Production Checklist.”

This calendar, the “Rehearsal Calendar,” and the “Production Checklist” are all included on the “Performance Package” page. You may also download this Development Calendar below.

How do you stage this Christian Easter pageant script? The same way you eat an elephant: one bite at a time. We learned some lessons that might come in handy for the “storytellers” in the Body of Christ. This simple 18-step process boils down the basics to bite-sized morsels.

This “Development Calendar” is a producer’s countdown of the tasks to be completed for the production of God’s Masterpiece.

Step 1 – Share the vision with the Senior and Music/Worship Arts pastors.

Step 2 – Determine the details of the performance of God’s Masterpiece.

Together with the Senior Pastor and the central leadership of your congregation, determine the production details.

Create a budget for this production. (See the Budget page.) Propose it, and make any necessary adjustments until it is approved.

Ask the Senior Pastor to share the vision for the production of God’s Masterpiece with the church staff. If he is for producing this Christian Easter pageant play, they will all be for it!

Share the vision of God’s Masterpiece with the directors and production assistants so that they feel like they are already an integral part of your “Executive Team.”

Step 8 – Prepare the advertising for vision-casting to the congregation.

Recruit the needed personnel for “live” previews, or prepare the video or musical, or screen graphics to be shared with the congregation.

Step 9 – The Senior Pastor casts the vision to the congregation.

Everything the Senior Pastor says is taken seriously, so let him cast the vision for this production.

• Show professional photographs included in the “Production CD” that is part of the Performance Package.
• Play some of the music from the “Performance Music CD” that is part of your Performance Package.
• Show some of the art pieces to be reenacted up on your screens.
• Have some volunteers dress in biblical costumes, and reenact “The Prologue.”
• Do whatever you need to do to communicate the vision to your congregation.
• Distribute the “Volunteer Forms.”
.

Step 10 – Create a database from all “Volunteer Forms.”

Collect all the “Volunteer Forms” that were handed in by the congregation. Sort them according to primary interests checked, then enter them into a database.

Recruit each one of your Crew Chiefs personally. Speak with them, then follow up in a letter which explains the details of their appointment. (See the Production Team page.) Use your “volunteer list” generated from your all-church announcements to find the most talented people to be your Crew Chiefs in each category.

Step 12 – Cast the vision to the heads of the “Production Teams.”

Invite all Crew Chiefs and the executive task force to a nice dinner; spoil them, they need to feel needed and cherished. Cast your vision. These people are the heart of your production.

NOTE: Many people will check several production crew interests, simply place those people’s names on as many lists as they checked. They will respond to whichever Crew Chief they want to when they receive their recruitment call.

Auditions are both thrilling, and stressful Here are some ideas to help them go smoothly:

• Print up production “Scoop Sheets” with all rehearsal and performance dates and times clearly spelled out. See the suggested “Rehearsal Calendar” for ideas.
• Decide if you will provide childcare for rehearsals; if not, do not allow children, who are not in the show, to attend rehearsals; they distract their parents.
• Print short script excerpts that feature that specific character or that class of characters for the auditions; for example, one set of “Crowd” dialogue will serve for all crowds. One “Disciple” speech will serve for all disciple speeches, etc.
• Determine when and where auditions will be held.
• It is best to audition one class of characters at a time; for example, disciples from 1:00-2:00. Fill the whole day with scheduled auditions.
• You may want to audition singers, dancers, and musicians on a different day from the actors.
• Invite directors, choreographers, the music/worship arts pastor, and any others to make casting decisions along with you.
• Advertise audition information on posters and in the church bulletin.
• Have interested parties pick up script excerpts (kept in an accordion file by character class or name) from the church office in preparation for their audition. You may also make those available for download on your church website.

Audition by groups in all the various cast categories of God’s Masterpiece.

NOTE: It is better for morale to limit cast and crew membership to your own congregation, but you may decide to link with another church or hire professional actors. If you do bring in outside people, be sure to have plenty of fellowship opportunities, so that everyone can bond together and create the “family feeling” you need in the cast.

Attend as many rehearsals as you can, and encourage everyone along in this task. Sometimes, the best thing the producer can do at rehearsals is stay out of the director’s way and serve refreshments!

Step 18 – Rehearsals leading to the performances

It is wise to have dancers, musicians, and singers, rehearse separately under the direction of their own supervisors. Mix them with the cast in the last four weeks of rehearsals.